Policies on Whale-watching and Commercial Whaling 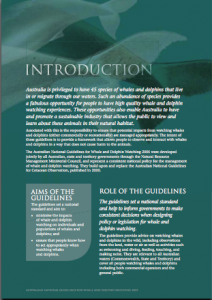 Wildlife Tourism Australia (WTA) is an incorporated association that promotes the sustainable development of a diverse wildlife tourism industry that in turn supports conservation. WTA’s membership comprises wildlife tourism operators, government bureaucrats, researchers, and others with a critical interest in the connection between wildlife conservation and sustainable tourism.

One of the main objectives of Wildlife Tourism Australia Inc. is to sustain the industry and conserve the wildlife resources on which businesses within the  the industry depends, in addition to supporting the ideals of wildlife conservation and animal welfare.

WTA believes that whaling, like many other consumptive uses of wildlife, is a complex issue with a range of moral, economic and ecological arguments and perspectives, and that some forms of whaling are part of traditional cultural practices in some countries.

The issue of the impact of whaling on conservation and animal welfare is well-publicised. Less well recognised is the economic impact of whaling on the whale-watching industry. Whales have captured the public imagination, and over the past two to three decades, whale watching has become an increasingly significant form of tourism globally.

The whale watching industry in Australia contributes close to AUD$300 million annually to the Australian economy and is growing at an average rate of 15%*. It is estimated that each year about one and a half million people observe whales either independently or with a commercial
whale watching operator.

It is the position of WTA that: