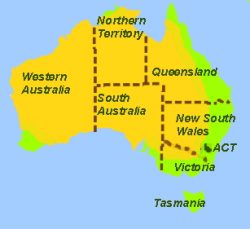 At around 2358 square kilometres, the ACT is by far the smallest of all the Australian territories and states, and the only land-locked one (being entirely surrounded by New South Wales), but includes Australia’s capital city Canberra, which is under 300km from Sydney and about a 4-hour drive from there (also of course accessible by plane or bus).

It is a mountainous area, with eucalyptus forests and woodlands, alpine vegetation and snow-capped peaks in winter. The dramatically-coloured and unfortunately very rare corroboree frog lives here as well as  alpine areas in New South Wales. Several Australian icons, such as kangaroo, emu, wombat, echidna and kookaburra live wild in the forests and woodlands.

Tidbinbilla Nature Reserve, a 40-minute drive south-west of Canberra is a good place to see kangaroos, wallabies, koala, platypus, echidna, emu, kookaburra, dragon lizards  and other native fauna in a natural setting. Some of the animals are naturally wild in the area, and others in large, forested enclosures you can walk through.

The National  Zoo and Aquarium, 15 minutes’ drive  from the city centre, is home to native terrestrial, freshwater and marine animals such as kangaroos, koala, wombat, Tasmanian devil, emu, little (fairy) penguin, Murray cod and barramundi  and an ever growing collection of exotic animals such as lions, giraffes, red pandas, monkeys, boas, iguanas and alligators.

The Australian National Botanic Gardens display native plants from all parts of Australia, and endangered species are under cultivation.