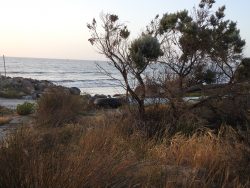 Adelaide is the driest of our capital cities, and also one of the easiest cities from which to travel to true outback, of which it has plenty, beyond crops and small farms, to saltbush and spinifex plains and the animals that live there, as well the Flinders Ranges (one of our National Landscapes).

Kangaroo Island is famous for its wildlife, the southeast corner for its caves and fossils, and the coastal waters for leafy sea dragons (a strange relative of sea horses), sea-lions, fur seals and penguins.

The world’s largest congregation of giant cuttlefish is found near Whyalla.  Visitors can swim with these colourful creatures, which are strictly protected.

For a good overview of wildlife and nature tourism in South Australia see http://www.tourism.sa.gov.au/assets/documents/Nature-http://tourism.sa.gov.au/news-and-media/news/2016/feb/20/tourism-strategy-on-track-to-create-1000-new-jobsbased_tourism_strategy_web.pdf

Scroll down for more information about South Australia 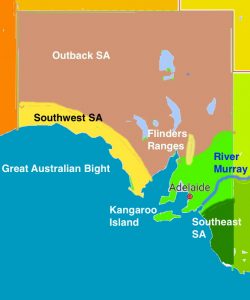 Other places to experience wildlife:

Adelaide and the Mount Lofty Ranges 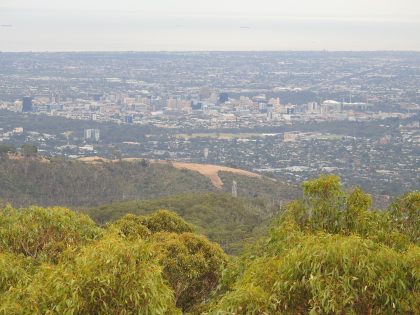 Adelaide viewed from the Adelaide Hills

The Adelaide Zoo is within easy walking distance rom the Adelaide CBD, and in addition to native animals, houses pandas and  a great variety of primates in addition to the usual lions, elephants and bears. Its colony of yellow-footed rock-wallabies has been a great breeding success for decades. Near the zoo is the Botanic Gardens, and a couple of blocks away (on the edge of the CBD) is the South Australian Museum, with whale skeletons and a good collections of Australian birds and other native animals both living and extinct.

A short drive from the city is the Cleland Wildlife Reserve, with large walk-through enclosures harbouring kangaroos, wallabies and other wildlife from various parts of the state, plus some smaller exhibits. Maurialta Gorge, Waterfall Gully and Belair National Park all offer good bush walks, birds and koalas. Koalas became extinct in South Australia in the 1920s when they were heavily hunted for their fur, but re-introduced some years later.

A popular outing for visitors and Adelaide residents alike is to drive south for a little over an hour to the seaside areas of Port Elliott and Visitor Harbour. Granite Island, off the coast from Victor Harbour, is home to little penguins.

Southern right whales can be readily seen from the coast in winter, often coming quite close to shore, and there are a number of what-watching tours on offer. The South Australian Whale Museum features three stories of whale artefacts, information and artworks.

You can view kangaroos and other native wildlife at Urimbirra Wildlife Park near Victor Harbour. Deep Creek Conservation Park offers good walks through the forest to a quiet beach.

Kangaroo Island is world renowned for its abundant and easily viewed wildlife. Habitats include open forest, mallee, banksia heathland and wild, windswept coasts with some dramatic rock formations. It offers populations of kangaroos, koalas, Australian sea lions and New Zealand fur seals,  little (fairy) penguins,glossy black cockatoos,  sea eagles and osprey. Koalas were never originally on the island but were introduced several decades ago.  Unfortunately there is now something of an over-population, defoliating their favourite trees.

The River Murray, Australia’s longest and widest river, enters South Australia from the east, and exits near Goolwa.

Houseboats can be hired for half a day or several days, and you can also ride the river in a paddle steamer. In the north look for yellow rosellas (yellow form of the crimson rosella) and various bush birds, outback birds and waterbirds. Goolwa, near the mount, is a good place for musk ducks, black swans and other waterbirds.

Near the river, a little over an hour’s drive east from Adelaide, is the Monarto Zoo, where you travel on safari-style buses, viewing giraffes, cheetahs and other exotic species wandering through large free-range enclosures.

Mallee woodlands are common north of the river, as they are in many regions of South Australia. Mallee trees are small eucalyptus trees with several trunks emerging from one rootstock. They tend to be rich in wildflowers in spring, which in turn brings in many birds. 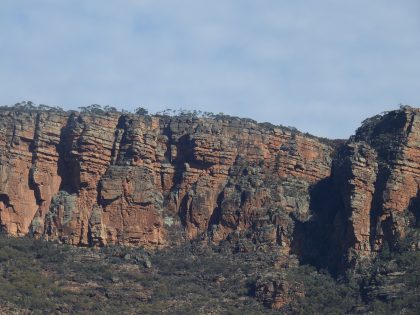 More than 80% of South Australia is  arid ‘outback.’The Nullabor Plain extends into Western Australia, and means ‘no tree’. Carpets of greenery and wildflowers  spring up ad good rains , but  dry conditions soon settle in once more, possibly for several years.

Lake Eyre is one of the world’s largest salt lakes, and is usually dry, but every few years fills with water when the rains come, and attracts  thousands of wetland birds.

The Flinders Ranges feature striking and  rugged mountain scenery, from soaring red cliffs to deep gorges. The very sure-footed  yellow-footed rock-wallaby, can sometimes be seen bounding up apparently sheer cliffs which must in fact   have small ledges the animals are well-practised at using. Black kites, wedge-tailed eagles, desert dragon-lizrds and large flocks of noisy galahs and corellas are common.  Ancient invertebrate fossils dating back to over 600 million years ago were found by geologist Reg Sprigg in Arkaroola in the northern region of the Flinders.

Simpson Desert National Park is one of Australia’s remotest wilderness areas, and can get very hot: if travelling there, make sure you take plenty of extra water, food and other supplies in case of breakdown.

South Australia has over 4,000km of coastline along the Great Australian Bight,  and the cliffs are an excellent spot to view southern right whales on their migratory path to warmer waters.

Those who would like an adrenaline rush or simply admire he power of the great white shark enthusiasts close up can try cage-diving near  Port Lincoln. You can also swim with seals.

The Coorong is a long body of water parallel to the coastline and harbouring a wonderful diversity of waterbirds, as well as emus, heathland birds, freshwater turtles  and lizards.

The Naracoorte Caves include many limestone caves, some with bat colonies and some with fossils dating back many thousands of years, including mammals such as thylacine, Thylacoleo and Tasmanian devil, all of  which were extinct in mainland Australia by the time of white colonisation (the Thylacoleo was already globally extinct, and the thylacine was later hunted to extinction).. At the world class and innovative Bat Cave Video Centre, you can view the resident bat population in the neighbouring cave via an infra-red camera system.