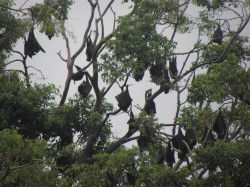 Spectacled flying foxes by the library before their trees were hacked into (photo Araucaria Ecotours).

Australia has a high biodiversity of wildlife, much of which can actually be found in our cities, which is great for our international visitors. While birds provide plenty of opportunities to see the more common varieties in the city, mammals are mostly cryptic or nocturnal or both. However there is one type of mammal, the flying fox a large mega-bat, that calls our cities home.
Flying foxes are not found in Europe, non-tropical Asia or anywhere in the Americas so they are a novel experience for many  of our visitors. Their spectacular evening fly-outs are a wildlife highlight of many a traveller’s Australian trip.

Flying foxes are keystone species moving seeds of rainforest and other trees from one isolated patch of rainforest to another and are a significant long distance pollinator of rainforest and hardwood forests particularly of eucalypts and related trees. They are migratory or nomadic, following the flowering of their food trees, many of which have irregular flowering which varies from year to year in both quality and quantity and in distribution. So a single flying fox can travel 40 km in a night and over 1,000 km in a year. The flying fox you see one year in Brisbane may be the one you see in Melbourne the next.

There are four species of large flying fox in Australia, found from northern WA, across the top end and down the east coast of Australia from Queensland to Melbourne and west to Adelaide. One species, the little red flying fox is also found in inland Australia following flowering along water courses but often visits the camps of its coastal cousins as far south as northern Victoria, stays a few weeks and then moves on. Two of the four species, the Grey-headed Flying-fox and the Spectacled Flying–fox, are listed as vulnerable under the Commonwealth EPBC Act, the main environmental protection act in Australia. The grey-headed flying-fox ranges from Ingham in Queensland down the east coast of Australia and west across Victoria to Adelaide, many of its camps located in cities, often in botanical gardens or by rivers or coastal mangroves. It is the only endemic flying-fox. The spectacled flying-fox is confined to wet tropics in Queensland in Australia but extends into Papua- New Guinea. The remaining species, the Black Flying-fox, is found in northern Australia, from WA across the Top End, throughout Queensland and south down the east coast to about Sydney. The different flying fox species often share roosts- In Ingham earlier this year you could see all four species roosting in the botanical gardens.
The great thing for visitors to the major capital cities is that not only can you see the spectacular flyouts, but you can also visit the camps in daytime and observe their daytime behaviour. But in Melbourne and Sydney the flying foxes are no longer in the botanical gardens in the centre of the city, so while you can see them foraging at night in the city you need to travel to the suburbs to see their daytime camps or evening flyouts. This is no hardship because they have selected roosts with both natural beauty and historical significance. Some of our Australian suburbs are worth visiting, especially so when flying foxes are involved.
But in Cairns, a Queensland city that acts as a gateway to both tropical north with its world heritage rainforests and the world heritage listed Great Barrier Reef, you can see Spectacled flying foxes in the middle of town, roosting in the grounds of the beautiful library. You can even stay in the adjacent Novotel hotel and overlook the camps and watch the evening flyout in comfort from your room.
However, there is a sad story to the bats in Cairns. Despite nightly photographing of the flying foxes flying out over Cairns from tourists, despite pleas from well known ecologist, Jane Goodall, and film stars like Glenn Close, despite interstate tourism industry delegates and operators who can see the potential of bat tourism in Cairns, despite the success of bat tourism in North America and other countries, one of the best known being the emergence each summer evening of free tailed bats from under a bridge in Austin, Texas which brings in thousands of visitors per year, Cairns Council dismisses flying foxes as a tourism attraction, one councillor saying that “there may be other places that are reduced to bat tourism …”. (Cairns Post April 2014).

Cairns Council has applied to remove the flying foxes from their roost in heritage listed trees at the Library and has begun a program of “tree trimming”. Because the spectacled flying foxes are listed federally, there are a number of criteria that must be adhered to, one being that work cannot take place if flying foxes are present in the tree. Local film maker team, Noel and Michele Castley Wright, allege that this criteria has been breached, and they have filmed this breach.
The trimming began a few weeks ago (late April 2014) and the bats have come back. Dispersal as a management tool is an ineffective and costly exercise. Most dispersals have not worked- the bats not leaving the local area but becoming scattered and roosting in smaller groups often in inappropriate places. Unless alternative good quality roosting sites are found, the flying foxes will return so long as there are trees to return to Roberts et al 2011).
The Council intends to move them on again, regardless of the stress this may cause to a Commonwealth listed vulnerable species and regardless of the cumulative other dispersals some of which include spectacled flying foxes are happening throughout Queensland. Unfortunately for the flying foxes, while listed at national level, they are not considered threatened at Queensland state level.
Because spectacled flying foxes within Australia are only found in Queensland, continued dispersals of their camps could cause local extinctions and possibly extinction within Queensland and thus Australia. And how are the extra-liminal populations going?
What will this mean for the wet tropics in Queensland? The loss of a keystone species will have an impact on our remaining tropical rainforests.
In the meantime in Cairns, you can still see the flying foxes but the trees they are in are a mess and the street scape once so nice and treed is now so ugly- what must tourists and visitors to Cairns think?