How networks lead to breakthroughs!

How networks lead to breakthroughs! 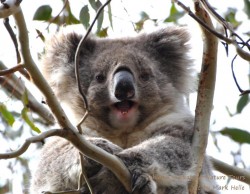 Sixteen years of looking up koala’s noses. Sixteen years of hand-drawn diagrams of nearly 100 koalas, and over 19,000 photographs. Thousands of koala sightings on hard copy maps in the early years, then the wonderous ease of GPS locations on mobile phones. Sixteen years of wondering whether a discovery made on a wildlife tour would ever be useful for the protection of koalas Australia-wide.

Echidna Walkabout’s first scientific paper: “As plain as the nose on their face: Efficacy of nostril pigment patterns in identifying individual koalas” has been accepted for presentation at the Pathways 2014 conference on Human Dimensions Of Wildlife in Colorado, USA. This is a huge leap for the Melbourne-based wildlife tour operator. For non-scientists, presenting and publishing a wildlife discovery to the scientific community is difficult. It couldn’t have happened without the input and encouragement of one very special man – Assistant Professor Jeff Skibins of Kansas State University. 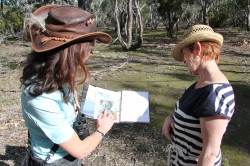 Janine & Roger of Echidna Walkabout met Dr Jeff Skibins at the Wildlife Tourism Workshop in Darwin in 2013. Jeff delivered the most inspiring presentation: a call to action for wildlife and eco-tour operators to upsell, publicize, and shout out to the world about how great wildlife tourism is for people, wildlife and the planet! Janine & Roger were so motivated by Jeff’s talk that they stayed in contact, and ultimately took Jeff on their tour. On tour Roger explained how they had discovered a method of identifying wild koalas from their nose patterns. Later Jeff did some research, and found that this discovery was a first for koala science. He encouraged Janine to write the paper, with himself and a colleague – Dr Peg McBee – as co-authors. Jeff and Peg have checked the data collected by Echidna Walkabout on their wildlife tours and pronounced it to be ‘very strong’.

The Pathways conference brings together wildlife professionals from all over the world to discuss how human behaviour affects wildlife management and conservation. Over 100 researchers presented at the 2012 conference, and around 500 delegates attended. Great Bustards in Mongolia, lions in Kenya, tigers in India, Monk Parakeets in Argentina and coyotes in US were all discussed. Jeff Skibins lectured on the influence of wildlife tourism on tourists, particularly on their subsequent conservation behaviour. For 2014, Janine, Jeff & Peg’s paper has been accepted by the conference committee, who proclaimed it to be ‘both interesting and relevant’.

Echidna Walkabout’s presence at the 2014 conference will be an exciting voice demonstrating that Australian wildlife tourism is a leader in the field of conservation tourism.

Wildlife Tourism Australia brought the network together that made this breakthrough.