Snake danger in Australia? Usually not, if you’re careful.

The most recent snakebite in Tasmania will no doubt make news around the world, and I’ve communicated with a number of people who are already scared to travel out of the cities in Australia because there may be snakes

Yes, a tourist was bitten, and yes, the snake was one of our most venomous species, but it could have been so easily avoided.

Snakes do not go out of their way to bite us – they know we are too big to eat, so they don’t stalk us the way crocodiles or sharks might.

I once was sitting on a hillside in Kangaroo Island watching birds.  After half an hour or so I shifted my weight and was about to put my hand down in the grass while finding a more comfortable position, when I realised there was something there that hadn’t been there earlier. It was a tiger snake – the same species that bit the above-mentioned tourist recently – curled up quietly beside me, sunning itself.  I gave a slight startle reaction and then froze. The snake also gave a startle reaction (it obviously had no more idea of my presence than I had of his) and then unwound itself and headed off down the hill. 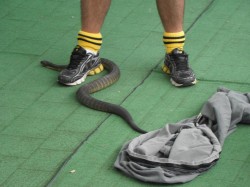 Freezing – as demonstrated with a tiger snake in the photo –  is in fact the best strategy when you find yourself very close to a snake – sudden movements could well cause it to panic, and you do not want to be close to a panicking venomous animal.

A Queensland zoologist  was once bitten by the same species after hiking so far into the forest alone he knew there was no hope of reaching medical aid, and had a few very anxious hours but it turned out the snake had just given a dry, warning bite, as they often do – it wasn’t going to waste its venom on something it couldn’t eat if it didn’t have to.

Many snake bites that lead to hospital visits actually do turn out to be dry, warning bites with no venom injected.  And many of the bites occur either through carelessness or macho bravado (often after a few drinks).

Now, the snake that bit this particular tourist.  I was night time, and all the snake knew was that something large and dark not only hovered closely over top but also deposited something quite unpleasant on top of it and continued to do so – fairly understandable that it panicked and bit.

Had the tourist shone a torch (‘flashlight’ for American readers) thoroughly around the area before squatting behind the bushes, he might have noticed the snake.  He apparently had a perfectly good toilet inside his accommodation but didn’t want to disturb others by flushing it at 4.00am – hence his sojourn outside amongst the bushes, which ended up somewhat more disturbing to everyone.

Another tourist earlier was bitten by a brown snake during somewhat similar circumstances, this time when making a roadside stop to relive himself

Both tourists survived their painful and frightening ordeals.

These incidents should not frighten anyone off normal, sensible activities in Australia’s outdoors.

Most people living their entire lives in snake inhabited country never get bitten.

The moral – just as you should not walk blindfolded across a road, you should not go putting any part of your body into places you can’t see. This includes not walking through long grass (and if you do have to, stamp your feet or tap the ground ahead of you with a stick – most snakes will soon get out of your way before you are aware of their presence), not  reaching your arm into dark bags, logs or corners, and checking the ground you are about to walk on (or do anything else on!), especially at night or other conditions of low visibility.