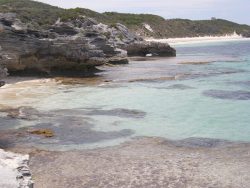 Western Australia covers approximately one-third of the Australian continent, yet contains less than one-tenth of the country’s  human population. It is a vast land of rugged outback, clear blue tropical waters and wildflowers that bloom in brilliant colours every spring. Whale watching is just one of the attractions in a state that has magnificent beaches, great camping, and world renown wine making regions.

Scroll down for more information about Western Australia 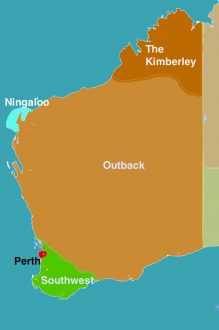 Back to Finding your wildlife experience

Perth Zoo is one of the few places you can see the numbat, a charming little Aussie mammal, and one of the very few native mammals that are more active by day than by night. On nearby Rottnest Island a daytrip from the capital city of Perth, lives the quokka, a small relative of kangaroos found nowhere else in Australia or in the world, and here you can walk right up to them! 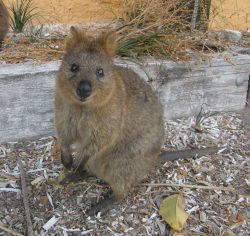 The southern corner of the state is known as the garden of Western Australia and is a perfect birdwatching destination to see honeyeaters, the red-tailed black cockatoo, whistlers, stints and nearly 30 types of parrots. Western Grey Kangaroos, echidnas, euros, potoroos, bandicoots, woylies (Brush-tailed Bettong), boodies (Burrowing Bettong) and the numbat (once widespread in the outback but nowadays found only in Western Australia) can be seen in the national parks of the southwest. Southern right whales can be seen from the Albany coast in the winter months, and the Dolphin Discovery Centre provides a wealth of information about dolphins and other sea creatures as well as cruises .

Rottnest Island is famous for one of our cutest wallabies – the quokka – and is also a very attractive island to explore, with plenty of native vegetation and good snorkeling opportunities.

In the far north, you will find plenty of wide open spaces, ancient boab trees and ‘cities’  of large termite mounds, their shapes and colours varying with termite species and subsoil. The Kimberley region is rich in magical places. including the large and fascinating beehive-shaped rock formations of  the Bungle Bungles to the refreshingly-cool water of Tunnel Creek .Gieke Gorge is a wonderful spot for camping if you would enjoy being woken up by what may well be the most memorable chorus of birds you’ll ever hear – birds from the desert, the arid woodlands the semi-rainforest riparian communities and the river all joining in. Freshwater crocodiles (smaller than ‘salties’, and not man-eaters) live here amongst the water-lilies, and the weirdly-eroded limestone cliffs display fossils from the Devonian.. The World Heritage area of Ningaloo Reef is the second largest coral reef in Australia (and the largest fringing reef) and offers the  opportunity to see humpback whales and large schools of manta rays. and to swim with the biggest fish in the sea – the whale shark. Shark Bay, another World Heritage area,  is famous for its friendly wild bottlenose dolphins at Monkey Mia, and also is home to dugongs, turtles, manta rays, school sharks and (in winter) the gigantic but harmless whale sharks. Stromatolites, rock-like structures built by blue-green algae, stand out of the shallow sea in much the same way they did 3.5 billion years ago. Kimberley Whales, Kimberley Quest and Oceanwise can introduce you to marine wildlife, while Kimberley Birdwatching will show you birds of all habitats.

Back to Finding your wildlife experience