Australia’s two largest birds are the emu and cassowary, descended from a common ancestor and related to the rhea of South America and ostrich of  Africa. 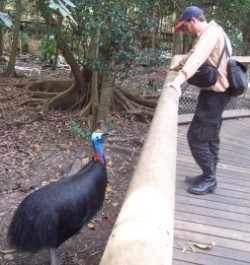 Our cassowary is the Southern Cassowary, which can sound confusing as it is only found in Far North Queensland, and there are no other species of cassowary in Australia, but there are other species in New Guinea, so ours is the only one south from there.

They are important dispersers of large-seeded fruits in the northern rain forests, nothing else being able to swallow some of the largess fruits whole and nothing else likely to carry them such large distances. When they swallow the fruit the soft parts are digested and the seeds are either regurgitated or pass right through the bird. Unfortunately numbers of cassowaries have been diminishing due to declining habitat, severe storms affecting food supply in some areas of fragmented habitat, and collision with cars.

They have been called the world’s most dangerous bird and certainly those powerful feet can do a lot of damage, but of course the birds don’t hunt people – they can just defend themselves very effectively if they feel threatened.

Where to see tem: Cassowaries can be seen at a number of wildlife parks such as Currumbin Wildlife Sanctuary and Hartley’s Crocodile Adventures, and in the wild at ecolodges such as Cassowary House and Kingfisher Park, and on tours such as Sickleback Safaris, Cassowary Tours and Alan’s Wildlife Tours. 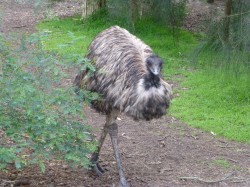 Emus are found only in Australia. They branched away several million years ago from the evolutionary line of the cassowary, and adapted instead to drier, more open habitats.  They used to be found in many coastal regions, but have now been reduced to only a few of these, such as the Minnee Waters region on northern New South Wales and the Coorong in South Australia, as their habitats have largely been converted to housing estates or agriculture.  However they are still flourishing in many part of the outback. Like the cassowary they disperse a lot of seeds (it’s surprising how many fleshy-fruited species there are in the outback, and there are many n coastal heaths) but also eat a lot of foliage, including grasses. Like the cassowary and there ratites, the female is responsible only for laying eggs – the father hatches them and takes care of the chicks. Emus are not known to attack anyone, although they can get a bit bossy in areas where tourists feed them (one good reason to resist the temptation to do so).