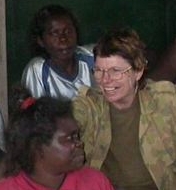 Denise Lawungkurr Goodfellow is a birdwatching/natural history guide, environmental/Indigenous tourism consultant and writer.  She began guiding in 1983.  Most of her clientele are well-educated, well-travelled Americans who hear of her by word of mouth. As biological consultant she has conducted fauna surveys in the remote Top End, often solo. In 1981 she stood for Council to save mangrove habitat.

Learning that Indigenous people lacked representation she won their trust by accepting an invitation from a senior woman to catch a water python, entailing four hours in a lake inhabited by large estuarine crocodiles. The Indigenous women were horrified when Denise was then threatened with prosecution, and to protect her they adopted Denise. Denise began working as a birdwatching/natural history guide for international visitors in the early 80’s.  Later she ran a national campaign against operators in Kakadu National Park who rammed crocodiles with boats to make them jump for visitors, a mistreatment that angered the Indigenous owners and made them want to ban visitors.

At the request of her adopted Aboriginal sisters, Denise helped establish an appropriate tourism project on their country, Baby Dreaming, in western Arnhem Land.  The elders, previously scared and distrustful of white people, drove 450 kms to Denise’s home to tell her their first visitors – American birdwatchers and students – were “great”. Elders also decided to make their prized hunting waterhole a sanctuary for birds. The sensitive visitation enhanced the status of women and families.   Denise has worked as a wildlife and Indigenous adviser to television, and in 2000 was contracted as an interpreter/transcriber on the Lonely Planet’s Guide to Aboriginal Australia.

Her book “Birds of Australia’s Top End” has been described as winning ‘top honors’ (American Birdwatcher’s Digest), and ‘impressive’ (the American Birding Association’s Winging It).  Her autobiographical Quiet Snake Dreaming is used for literacy projects in European educational institutions and cross-cultural awareness courses.  American author, Jonathon Franzen, said this book gave him ‘great insight’ into the lives of Aboriginal Australians.  Indigenous people including Leon, a Tiwi Islander, have said the book will be good for bringing people together (Sept. 2013).

Another of Denise’s books, Fauna of Kakadu and The Top End, has been a “core text” of the University of NSW’s summer school since 2000.

In 2009 Denise was invited to speak in the US on conservation, wildlife of the Top End, and Indigenous issues and tourism, giving 33 lectures in 2 1/2 months.  She is doing a PhD on American couples who travel internationally to watch birds.

Denise has guided for thirty years.  Most of her clientele are well-educated, well-travelled Americans who hear of her by word of mouth.