There are many more invertebrates than vertebrates throughout the world. By far the largest group of terrestrial invertebrates is the arthropods, comprising insects, spiders, ticks, mites, scorpions, centipedes, and millipedes.

Australia has 26 of the world’s 29 orders of insects, yet many new species of insect are being discovered every year, and it is estimated that there are well over 225,000 species in Australia.

The glow worms (actually fly larvae), which live in caves and rocky creek banks and glow to attract their prey, are found only in Australia and New Zealand. The insects called glow worms in the Northern Hemisphere are the larvae of fire-flies, which are in fact beetles. The glow worm caves are a popular tourist attraction in both countries. Fire-flies are also quite common in some forested areas. 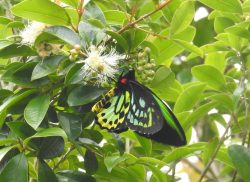 Butterflies are many and varied, belonging to five major families: whites and yellows (Pieridae), nymphs and kin (Nymphalidae), coppers and blues (Lycaenidae), swallowtails (Papilionidae), and skippers (Hesperidae). There are also beautiful jewel beetles, colourful dragonflies and many other highly attractive insects.

Termites in the northern outback build ‘cities’ of gigantic homes, and throughout most of Australia you can see smaller terrestrial or arboreal termite nests, some of which (especially the arboreal ones) are frequently used by kingfishers to make their own nests in.

Freshwater invertebrates include molluscs, leeches, spiders, water mites and a range of insects such as stoneflies, mayflies, water ‘scorpions’, water beetles, water bugs, mosquitoes and midges. More widely known are the crustaceans such as freshwater crayfish, crabs and yabbies.

Also visit CoralWatch for educational material and  how you might get involved in some citizen science on the Great Barrier Reef.

The very high diversity of marine life in Australian waters is related to the wide latitudinal range of marine habitats, and the presence of the world’s largest intact coral reef – the Great Barrier Reef.

The main groups of invertebrates found underwater and along the shore are sponges, coelenterates, worms, crustaceans, molluscs, bryozoans, echinoderms and urochordates.

Where to see them. The Great Barrier Reef is justly famous, and many tours head to this amazing natural wonder.

Fewer visitors no about other coral reefs, such as those at Ningaloo, which can be explored with Oceanwise,

Dives off the southern coast can also involve wonderfully diverse marine communities and sightings of the strange leafy seadragons.