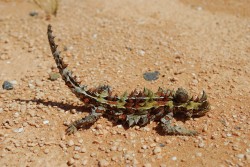 Australian reptiles are divided into these commonly recognised groups:

The relatively dry climate in Australia has favored a high diversity of reptiles, with over 830 species currently known and 89% of those being endemic (i.e. found nowhere else).

The most diverse group of Australian reptiles are the lizards. There are 617 species commonly known as goannas, skinks, geckos, dragon lizards, and flap-footed lizards (also called snake-lizards or legless lizards).

The large prehistoric-looking goannas are related to the monitors of Africa and the Komodo dragon (the Komodo dragon is not really a dragon lizard – it’s a monitor). A long-extinct Australian goanna was actually larger than its Komodo relative, and features in some Aboriginal stories.

The true dragons include the famous frill-necked lizard any many other species, including the odd-looking thorny devil pictured above. The family was named after brightly-coloured gliding species in southeast Asia. Many of them look iguana-like, but there are no iguanas native to Australia.

The flap-footed lizards are a primarily Australian group of lizard, related to the geckos. 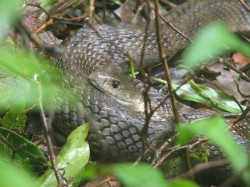 Australia is also internationally recognized for its snakes, especially its reputation for having many of the world’s most venomous species. e also have many nonvenomous or weakly-venomous species.

Snakebites are rare, and are generally easily avoided by not walking through long grass or carelessly reaching into dark corners. Stamp your feet to warn snakes if you do have to go through long grass, checking the ground in front of you when walking on a warm night. Do not reach into dark places such as under logs or into  bags that have been outside for a while or in rodent-inhabited sheds without looking first.

Snakes do not see people as prey and generally only bite if they are startled or feel under threat. They will generally move out of your way quickly. The best thing to do is to stand still and let them pass.

There are 188 species of snakes in Australia, including the blind snakes, pythons, collubrid (rear-fanged) snakes, elapid (front-fanged) snakes, sea kraits and sea snakes. Now that taxonomists have separated pythons and boas, Australia has more pythons than any other country.

Salt-water crocodiles are the largest reptile in the world today, and do very definitely see humans as prey – they have caused several human deaths. They are mostly restricted to coastal rivers and swamps in northern and north-eastern Australian coastal regions.

Fresh-water crocodiles will usually only bite in self-defence and do not attempt to capture humans.

All the world’s marine turtles except Kemps Ridley Turtle visit Australia at times, and the Flatback Turtle (Natator depressa)  is unique to northern Australia and neighbouring islands. The most important breeding ground in the Pacific for the green turtle is Raine Island, off Queensland’s coast.

Freshwater turtles are found in all states and territories except Tasmania.