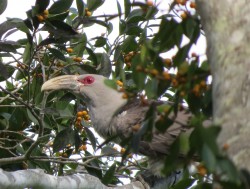 I arrived at Hinterland Park on the Gold Coast early in the morning and could hear the Channel Billed Cuckoo’s as I pulled up into the carpark. Heading straight for the large fruiting fig tree, I found them feeding as was to be expected (right), but they took off to a big old gum tree a hundred meters away on the highest part of the ridge when they noticed me.

I followed the walking trail around to below the gum tree where one of the cuckoos was making a large ruckus and i was trying to take a few photos of the Cuckoo high in the tree when the other cuckoo returned and with great commotion fed the first bird a fig (below). This continued as i watched the adult return and with those large bills, awkwardly feed the one in the gum tree while it screamed for more.

As the Channel Billed Cuckoo is Australia’s largest brood parasite and does not raise its own young I was surprised to watch what seemed to be an adult doing just that. 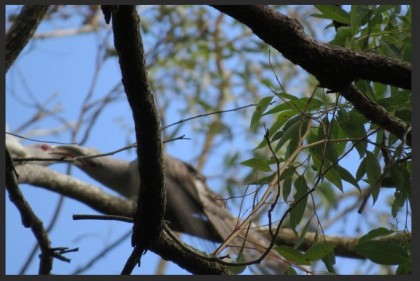