Many thanks to our sponsors Bio-Rad, Ionicon, Dreamworld and Adina Hotel 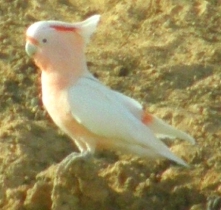 Cockatoos and other parrots are favourite targets for illegal wildlife trade 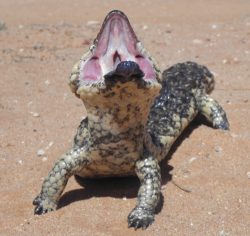 Unfortunately this impressive display won’t stop a poacher. Shinglebacks are among the reptiles being smuggled out of our country by unscrupulous dealers

Illegal wildlife trafficking is seriously threatening fauna species around the world.  Poaching of elephants, rhinos and tigers for their tusks, horns and other body parts has received much recent publicity, but lesser-known animals such as pangolins, various reptiles and others are also under severe threat. Australian cockatoos and other parrots, pythons, and  lizards such as frill-necks, shinglebacks and thorny devils can fetch high prices which tempt black-marketers to smuggle them overseas.

Wildlife tourism can both assist in the fight agains illegal trafficking (responsible tourists and tour operators keeping a watchful eye for suspicious activities, and spreading the word about not buying souvenirs involving parts of native animals) but also hinder it (irresponsible or less-informed tourists buying souvenirs that include illegal wildlife parts, traffickers posing as tourists to get subsequent secretive access to animals, or simply a promotion of places where particular species are easily found).

Scientists are becoming more cautious about revealing where animals have been found, as poachers use scientific literature to find their specimens. The same can happen if locations if animals that are testing to poachers are publicised in tourism circles.  Kruger National Park has signs for visitors to peruse at rest camps telling them where animals of interest have been seen, which is great for the tourist but unfortunately useful for poachers also, so they are now reluctant to divulge for instance where to find rhinos.

It does happen in Australia. The CITES has reported it as a multi billion-dollar industry, with traffickers finding various ways of concealing reptiles, birds and other wildlife in their luggage or strapped to their bodies. Th Australian Geographic reports the illegal trade as massive, complex and nebulous.  Two recently well-publicised cases have involved a National Rugby League player and a Northern Territory taxidermist. We need to combat this crime and also stay safe. We have spoken to a police warden who received death threats when getting to close to evidence, Taronga Zoo have developed an app that can be used to safely report suspicious activities. 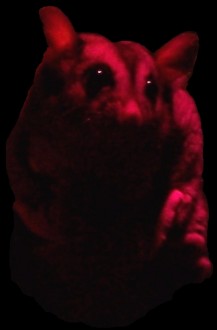 Even gliders are being smuggled.  So far we don’t know of any Mahogany Gliders such as this one being smuggled, but sugar gliders certainly have been.

Illegal wildlife trafficking is a major conservation problem, often involving wealthy business people (not necessarily those actually doing the collecting) with ‘friends in high places,’ (e.g. a woman we were told about who was  flying from Australia to Vancouver, tracked as a wildlife trader but who appears to have not been on board when the plane landed) and thus can be a very challenging crime which needs to be tackled from various angles. These include wide public education, heavy penalties for traffickers who are caught, investigation of crime rings, vigilance by rangers and others in wildlife-rich areas, increase of powers of rangers (where safe) to apprehend those they suspect of poaching, and detection by customs of wildlife or their body parts not only as they enter a country but also as they prepare to leave. Bio-analysis of body parts (especially nucleic acids and proteins) and keratinous materials (i.e. fur, feathers) for elemental profiling, can be utilised to detect where items have come from (e.g. showing that a tiger bone said to have come legitimately from a tiger that died of natural causes at a zoo in fact came from the wild in a remote forest) and further research to perfect these techniques could prove extremely valuable. Sniffer dogs that are extensively used in tracking endangered species and weeds in the wild, and also drugs and illegal plant and food carriage in airports, could very useful be employed in detecting fauna not only entering the country, but in the luggage or passenger clothing (e.g. stitched into coat linings) before traffickers board an international flight.

This one-day workshop hopes to bring together academic researchers working on detection by biochemical analysis and other means, trainers of sniffer dogs, airline staff, biosecurity officers, tourism operators and conservation managers (and anyone else with an interest, and perhaps some innovative ideas) to develop guidelines on how best to combat the illicit trade in Australia and elsewhere. 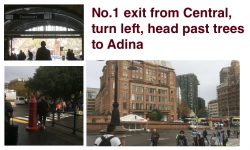 Many thanks to our sponsors (please follow link below for details): 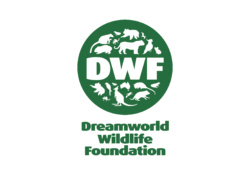 Please see details of our sponsors by clicking here