Senator Janet Rice is the Australian Greens Senator for Victoria with portfolio responsibilities for Forests, Transport and Infrastructure and Tourism.   Janet has a thirty year history in the environment movement while also working in transport planning in local communities and as a mayor and local councillor with Maribyrnong City Council.

In her work as Greens spokesperson for Tourism,  Janet has been exploring the issue of how to combine an ethical and environmentally sound approach to tourism,  with a focus on the economic benefits that nature based tourism can bring to rural and regional communities, especially those that have previously seen themselves to be “timber towns”.

Janet is a little unusual amongst Australian politicians nowadays in holding a science degree, and is well acquainted with ecological literature. A long-term conservationist, she has recently argued in parliament for stronger national protection of Victoria’s faunal emblem, the tiny and endangered Leadbeater’s possum, including the cessation of logging in the magnificent tall mountain ash forests, and the establishment of the Great Forest National Park, which would have excellent potential for tourism as well as biodiversity conservation. She has campaigned also for better public transport, which would assist both tourists and locals as well as reducing the need for fossil fuel.  She wants to ensure that Australia’s position as a world-class tourist destination is maintained by protecting our natural wonders such as the Great Barrier Reef and Tasmania’s World Heritage listed forests.

In May this year Janet completed a listening tour in East Gippsland,  talking to local tourism operators and environment groups.   Janet will talk about the intersection of the environment, tourism and policy, and how important saving our threatened species and wildlife is to building a robust tourism and recreation sector.

Wildlife tourism in Indonesia: A Review on Development and Progress 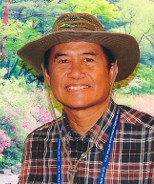 For his dedication and contribution in the field of Natural Science research in Indonesia he received several distinguished awards, including from his Royal Highness Prince of Bernhard of the Netherlands in 1999, the Habibie Award in 2009 and the Achmad Bakrie Award in 2011.  He has been elected as member of Indonesian Academic of Sciences (AIPI) in 2012.  His recent book “Nature Travelling in the National Parks” tells his experiences in exploring various national parks both inside and outside the country as well as giving a scholarly overview of the nation’s national parks and the history of their development, challenges to park management and suggestions  for overcoming some of the obstacles to their contribution to tourism, conservation and local economies.

His past roles have included (amongst others) chief editor of the scientific journal ‘Tropical Biodiversity’, chairman of the Jakarta Chapter of the Indonesia Biologist Association, regional vice president of Conservation International, president of South East Asia Primatologist Association, supervisor of many postgraduate students from Indonesia, Australia, USA and elsewhere, and he has been a board member of operations such as the Earthwatch Institute, the Biodiversity and Development Foundation and Roundtable Sustainable Palm Oil. He has also discovered or helped discover many new species of animals including primates, reptiles and amphibians.

Indonesia is one of our nearest neighbours, and our two countries are both rich in wildlife but very different, so the future should see a great expansion of wildlife travel in both directions. When Australians think of traveling abroad for a wildlife experience they tend to think of Africa with its great apes, monkeys, big cats, rhinos and elephants, but Indonesia also has great apes, monkeys, big cats, rhinos and elephants, as well as giant lizards, tapirs, pangolins and some of the world’s most species-rich diving sites.

Tourism Victoria is sponsoring Jatna’s travel to present his keynote speech “Wildlife Tourism in Indonesia: Progress and Future Development”,  and he will be staying for the entire conference and participating in discussion groups.

Dr Warwick Frost is editor and one of the authors of the book “Zoos and Tourism: Conservation, Education, Entertainment?” and a number of other relevant books and papers.  It is described by Amazon.com as “the first book to specifically examine zoos as tourist attractions,” and includes research reports by various authors,  largely from Australia and Asia.

He lectures in Tourism and the Environment at La Trobe University in Australia. His research interests include natural and cultural heritage, tourist attractions and the interplay between tourism and popular culture. He was the co-editor (with C. Michael Hall) of “Tourism and National Parks” (2009) and is a co-convenor of the biennial International Tourism and Media Conferences.

“The best zoos are continually developing fresh and effective techniques on visitor interpretation and animal management,” says Dr Warwick Frost in the above-mentioned book, “the worst highlight the manipulation of animals for human gratification.” He notes the trend for modern zoos to move towards serious attempts at conservation, research and education rather than merely recreation and entertainment, but that skepticism remains, and there are more calls to close down zoos as an institution than any other kind of public attraction.

The inclusion of zoos in tourism (as opposed to outings for local residents, as they’re traditionally viewed), and efforts of zoos to increase their revenue, may add to this skepticism, yet sufficient income is obviously necessary if they are to not only persist (and continue conservation work) but justify themselves to economic planners by contributing to the region’s economy.

How then do we balance economics, conservation, education, research and animal welfare?   How can seeing zoos as tourism offer new insights to planners and managers?   Can doing so assist with their role in conservation and education?   Dr Frost’s keynote address is certain to be thought-provoking.

Christopher Warren is Director of the International Centre for Responsible Tourism Australia, which aims to make the world a better place by conducting research into understanding human nature with a view to creating more ethical forms of tourism,  promoting accessible tourism for people with disabilities,  elevating the status of Indigenous Australian culture, recommending actions to reduce negative impacts and helping businesses, community groups and governments to harness the key attractions of destinations to foster economic benefits to conservation and the community.

Many years of marketing and advertising with some of the world’s largest companies,  regional airlines and hotel chains across four continents has given Chris wide and valuable experience in tourism.  He specialises in responsible tourism, and has been awarded the Eco Medal at the 2010 Global Eco Asia-Pacific Conference for services to communities, tourism and the environment.

His  keynote address will outline the  roots and progress of responsible tourism,  and share details of a research project that measured the effects of interpretation featuring Aboriginal Cultural Belief Systems to encourage a connection with nature,  connection and environmental concern in children, and promote a deep bond with animals and plants.

Dr Jeffrey Skibins is an Assistant Professor of Park Management and Conservation at Kansas State University.  The focus of his research and teaching is on human dimensions of wildlife conservation. Specifically, how the wildlife tourism experience, both in the wild and in zoos and aquariums, fosters an emotional connection to wildlife and how this connection influences tourists’ behaviours. He has conducted research throughout the United States, Africa, and Australia.

He holds a Ph.D. in Park and Conservation Area Management from Clemson University, a Master’s degree in Conservation Biology from Illinois State University, and a Bachelor’s degree in biology from Illinois Wesleyan University. He also has fifteen years experience as a natural resource manager and interpreter.   He has created, marketed and sold new programs in nature education for adult learners, worked as consultant for national parks and zoos around the world on issues of conservation and interpretation, presented environmental education programs to school and family groups and carried out ecological restoration and monitoring initiatives.  He has published many papers relevant to wildlife tourism, including the role of charismatic flagship species for promotion of tourism and conservation, visitor reaction to these in zoos and the wild, the bushmeat trade in Africa, and best practice nature interpretation. You can see a sample of  his publications here

His Australian experience includes working with Zoos Victoria on Leadbeater’s Possum conservation and the Love Your Locals campaign, investigating the benefits to koala conservation from ecotourism, and collaborating with the faculty at Southern Cross University to explore issues surrounding Australian wildlife.  At Wildlife Tourism Australia’s workshop in Darwin in 2013, he co-convened (with David Croft) a roundtable discussion “How can we best make wildlife tourism contribute to wildlife conservation?” via Skype, and became interested in the koala research conducted by delegates Janine Duffy and Roger Smith of Echidna Walkabout in Victoria.   Janine and Roger were also inspired by Dr Skibin’s call to action for wildlife operators to “shout out to the world” about how great wildlife tourism is for both people and wildlife, and later took him on one of their tours, explaining how they developed a method of identifying wild koalas from their nose patterns.  Dr Skibins determined this was a first for koala research and encouraged Janine to write a paper, with himself and a colleague, which Janine subsequently presented at a conference in America.

Since 1998 she has supervised, taught and undertaken research on ecotourism, cultural landscapes and indigenous tourism. She is of Nga Puhi, Ngati Ruanui and Scottish/Irish ancestry with a family history of nature tourism guiding that dates back to the 1880s.

Anna worked for the Departments of Conservation and Lands and Survey for a decade and had 12 years of experience owning two nature tourism businesses before being ‘captured’ by academia. Consequently Anna enjoys working with ecotourism and wildlife tourism operators throughout New Zealand and has served as an advisor on the NZ Ecotourism Advisory Committee and director of Te Ana Whakairo (Ngai Tahu Māori Rock Art Centre Trust).

Anna is currently a board member of the Otago Conservation Board and editorial board member for Tourism in Marine Environments and the Journal of Heritage Tourism.   She recently co-edited a book on Mountaineering Tourism, with Ghaz Musa and James Higham and her research interests include cultural tourism, landscape/protected area management, indigenous development and outdoor recreation.  She is a Senior Lecturer and co-director of the Centre for Recreation Research in the Department of Tourism (University of Otago).

Anna’s keynote address reflects on the wildlife tourism sector in New Zealand, with case studies from the Otago region. She will focus on species and habitat protection at two sites enabling community engagement in the sector.

Reflections include how communities benefit from wildlife tourism (and vice versa)? How is the Department of Conservation supporting community members’ initiatives?  More importantly, how have habitats been managed and enhanced so protected species flourish and visitors are enthused about conservation?