Jennie Gilbert and her husband run a large veterinary clinic in Cairns, and Jennie is also a researcher of marine turtles at James Cook University. In 2000, she and fellow marine biologist Paul Barnes started one of Australia’s largest  voluntary  turtle rehabilitation centres with  an attached  interpretation centre presently being built.

Fitzroy is a beautiful little continental island with fringing reef. Just over an hour’s ferry ride from Cairns, it includes rainforest walks, lovely beaches, mountainous terrain (it is essentially a mountain top with most of the rest of the mountain now covered by sea) and coral you can snorkel amongst just by walking out fro the beach. Not quite as diverse as the outer reef, there are still plenty of species of fish foraging amongst the corals, and I was especially thrilled when a unicorn fish passed close to me.

The turtle hospital is near the best snorkelling area, and when I visited had just two turtles in the tanks (I was told there were a few more at the Cairns Turtle Rehabilitation Centre on the mainland). One – an olive Ridley turtle –  was very badly injured when first brought in  and recovery is taking while.

The other, a green turtle, is doing very well and will probably be released fairly soon. Since green turtles are herbivorous, I was surprised to see her eating squid, but they apparently adapt very readily to that in captivity.

You can easily visit Fitzroy Island as a day-trip from Cairns, but even better you can stay overnight, either at the campground or the very attractive and comfortable Fitzroy Resort

The turtle information centre is due to open a little later this year: keep tuned for a report here from Jennie. 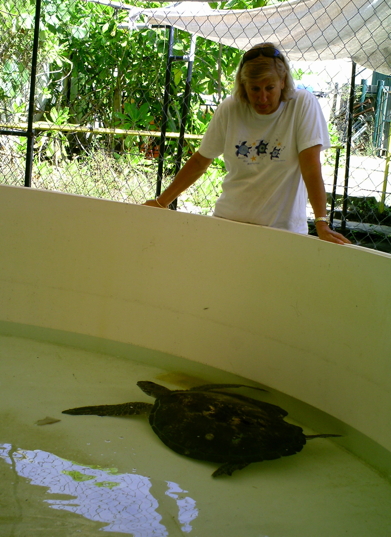 Jennie Gilbert with a green turtle on Fitzroy Island. The missing piece of shell on her right hand side will never re-grow, but she has now recovered well from other injuries and is soon to be released )