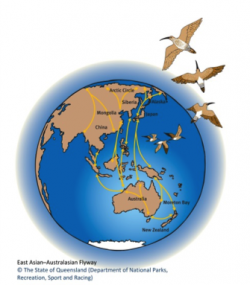 Each summer, Moreton Bay near Brisbane is visited by some 50,000 migratory shorebirds. To get here, they fly thousands of kilometres from wetlands in the northern hemisphere along the East Asian–Australasian Flyway.

More than forty shorebird species frequent Moreton Bay including thirty species of migratory birds such as sandpipers, tattlers and godwits. The largest and most easily identified visitor is the Eastern Curlew notable for its long curved bill.

At low tide, shorebirds wander over exposed sandbanks, seagrass beds and mudflats to feed. When these areas are covered by the rising tide, the birds move to viewable roosting areas where they gather in hundreds.

During the southern hemisphere’s winter, when migratory birds are visiting China, Siberia and Alaska, there are still plenty of resident seabirds and shorebirds in Moreton Bay including terns, oystercatchers, herons, egrets and cormorants.

Moreton Bay’s diverse wetlands ecology has been internationally recognized under the Ramsar Convention since 1993.  An area of 113,000 ha, including most of the southern Bay, is protected for many reasons including environmentally important populations of shorebirds, dugongs, green turtles and loggerhead turtles.

Humpback wales occasionally enter Moreton Bay on their southern journey each September before heading down the ocean side of North Stradbroke Island which can be accessed by vehicular ferry from Cleveland’s Toondah Harbour.

Redland City (including North Stradbroke Island) embraces southern Moreton Bay and its Ramsar wetlands. The 10 km coastline between Cleveland Point and Redland Bay is largely unspoilt by the development that has blighted many other coastal areas in Queensland.  Parks and extensive foreshore walkways provide excellent opportunities for viewing Moreton Bay’s rich bird life.  As a bonus, the coastal vegetation includes many trees that are home to Redland City’s significant population of koalas. 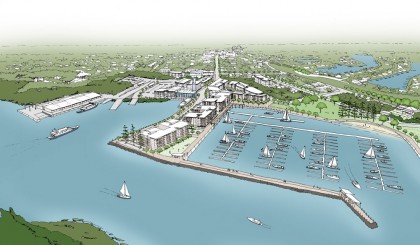 This area of national environmental significance is threatened by the Redland City Council and Queensland Government’s plans for massive coastal development at Toondah Harbour in Cleveland and Weinam Creek in Redland Bay.  Proposed developments at Cleveland include a 400 berth marina which would destroy seagrass beds, mudflats and mangroves all of which are important habitats for the area’s shorebirds, dugongs and turtles.

Local resident and environmental groups would prefer the Council and Government to focus on sharing Moreton Bay’s Ramsar wetlands and unique wildlife with tourists from around the world. Where else can you drive less than one hour from a major international airport to vantage points where you can easily view an amazing variety of shorebirds and often see koalas as well?

For more information go to: www.redlands2030.net