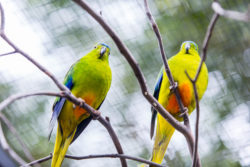 With less than 50 left in the world, the new aviary gives a significant boost to the captive breeding program with the facility able to house 40 birds and breed up to 100 birds each year.

The specialised off-the-ground aviaries are designed as a quarantine facility to prevent the spread of beak and feather disease, which can affect these parrots in the wild, and feature two 12 metre long free-flight aviaries for non-breeding seasons.

Zoos Victoria has contributed almost $100,000 towards the development of the new aviary, with the privately owned Moonlit Sanctuary also financially supporting the construction and ongoing maintenance of the facility.

Moonlit Sanctuary Director Michael Johnson said: “We are incredibly proud to open this new facility, which not only marks our 15th anniversary, but helps us take a huge step towards growing the captive population of Orange-bellied Parrots for release into the wild.
“We are thankful to the funding provided by Zoos Victoria – this contribution and partnerships between governments, community groups, zoos, and the Orange-bellied Parrot recovery team is key to the survival of this Critically Endangered species.”

One of only two migratory parrot species, these birds make the huge journey across Bass Strait each year, breeding in Tasmania over summer and migrating in winter to south-eastern Australia, including the shores of Western Port Bay just 500 metres south of Moonlit Sanctuary.
Moonlit Sanctuary has been a key partner in the Orange-bellied Parrot program since 2013 and is committed to spending $500,000 over the next 10 years to run the new breeding facility.

“Saving species is very much a team effort and it is terrific to have Moonlit Sanctuary substantially expanding on their involvement and commit to saving this iconic bird from extinction” Dr Magrath said.

This spring, Moonlit Sanctuary will release three orange-bellied parrots from its captive-bred population at their breeding site in Melaleuca on the south coast of Tasmania.

Chief Executive Officer of BirdLife Australia Paul Sullivan said: “We are committed to working with government and other organisations to protect the Orange-bellied Parrot, and this new facility is critical to managing and enhancing the captive breeding program to save this species.”

The new breeding facility features a viewing platform for visitors, an educational space to learn about the species, and a nest cam to observe the breeding behaviours of Orange-bellied Parrots.

Located only a 50 minute drive from Melbourne and on the way to Phillip Island, Moonlit Sanctuary is set on 10 hectares of bushland allowing visitors to view Australian wildlife in their natural habitat. 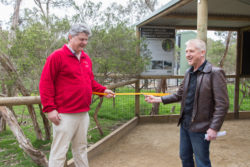