With the deaths of six Indo-Pacific bottlenose dolphins (Tursiops aduncus) in the Swan-Canning Estuary in 2009 emphasised the need to better understand the ecology of dolphins within estuarine environments. 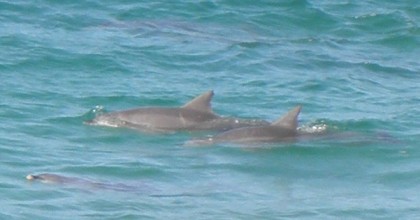 Research has already been carried out in the Swan-Canning, Cockburn Sound and Bunbury confines.

Raeside has teamed up with Mandurah Cruises who have offered their vessels to him on a daily bases to carryout research and use them as a photographic platform which allows him the opportunity to get very close to them.

The studies will focus on developing a photo—identification catalogue of the dolphins found in the Mandurah Estuary and Murray and Serpentine river systems.

The collaboration with Mandurah Cruises and Mr Raeside’s research will have an end result of having identified and naming most of the mammals from markings on the dorsal fins but will be an opportunistic time to study the presence of any skin lesions that will access the dolphin’s population health.

Each dolphin sighting is recorded with time, location with GPS and number of dolphins present that will form part of the photo-identification data.

The research will be the base of subsequent studies of the dolphin population occurring in the Peel Region.

When asked about the dolphins he has seen so far he stated they looked happy, healthy, large and productive.